I had a package show up here at the Gunmart Blog Test Kitchen not too long ago from the good people over at Crimson Trace. Inside of said package was one of their newest introductions to the marketplace… The Crimson Trace Rail Master.

Crimson trace first leaked pictures of this awesome new product back when they teased us all about their skunk-works projectto put a laser on a lever gun. What they showed us was in fact their then unnamed Rail Master on their prototype rail device for lever guns (dont hold me to this, but I bet it will be released at the upcoming NRA Show). As you can see from the photo below, the Rail Master is a versatile piece of equipment. In fact, it can fit on just about any firearm with a rail. Rifle, handgun, shotgun, battle mug, and not too far down the road…. lever action guns too. The bottom line is that this is a universal laser aiming devise that can fit on just about anything with a rail.

Upon opening the package for first inspection, I noticed that this laser comes with a bunch more stuff in the box than most Crimson Trace lasers do. In addition to the standard hex wrenches, battery, instructions, and what not… also included are a total of 4 numbered rail adapter inserts. These are used to insure proper fit of the universal laser to match specific variations in firearm’s rails. The instructions do a very good job of clearly outlining exactly which rail adapter to use with which firearm.

Upon further inspection of the unit, I was pleasantly surprised at how well constructed this laser was. I say “surprised” because this is not the first laser to come to the marketplace with this design style and method of operation. It is, however, the first laser of this design to be manufactured to the level of quality and durability that you would expect from Crimson Trace. Its constructed with a polymer shell, and is rock solid and obviously very well made. I have handled some of the other similarly designed lasers out there, and compared to the Rail Master they all really feel like a toy.

I was also very impressed with how well they could manufacture such a device yet still keep it so tiny. It measures in at approximately an inch and a half in length and is one inch wide. On my postal scale the Rail Master weighs in at a mind boggling 0.5 ounces without the battery and 0.7 ounces with the battery – seriously! Its just crazy how good these guys are getting at making lasers!

The Crimson Trace Rail Master runs on one 1/3 N lithium battery and has a run time of over 4 hours. Battery instillation and removal is done simply by sliding the battery lid off of the bottom of the unit. This is a great design in that it is (1) simple, and (2) able to be accomplished without having to remove the laser from the firearm. That makes it extremely easy for the user to change out the battery, and it wont effect the laser’s zero at all.

Instillation of the Rail Master is pretty simple and straight forward. It took me just a few minutes to attach this to my rifle, and that was without even bothering to read the directions (Yes, I’m male. I dont read directions). I didn’t have to change out the rail adapter (which comes already installed from the factory) to put this laser on my rifle, but if you have the need to do so it wont take very long at all. The process is as simple as loosening two screws and then sliding the insert off of the laser unit.

At the range the Rail Master proved to be a fine tool. The laser is adjustable for both windage and elevation, and it comes from the factory already sighted in for a distance of 50 feet. I only had to make a few small adjustments to elevation (which would be expected when mounted on a rifle) and then I was ready to go.

Laser activation is facilitated by tapping either of the ambidextrous activation buttons on the side of the unit. There are no complicated modes to cycle through to get to the setting that you want, so in a true life or death situation the laser is going to be there instantly to give you the aiming assistance that you need. The unit will also power off after 5 minutes if you inadvertently leave it on.

The laser performed great for the couple of range sessions that I have gotten to play with it. When I shoot my AR I like to run a vertical grip and shoot with a “thumb-up” style grip. I found that the best place for me to mount the Rail Master was right in front of the grip. This made for a very comfortable way to hold the rifle, while at the same time allowed me to reach around and toggle the activation switch on the far side with my middle finger. It worked out to be a great way to use the laser intermittently and toggle it off and on as need…. honestly, after a little practice it was just as easy as using a remote switch. Of course it can be mounted just about anywhere on the rifle that there is a section of rail, so the possibilities are literally endless.

I have reviewed several Crimson Trace products in the past on this blog and have been thoroughly impressed with the quality and performance of each of them. The Rail Master is certainly not an exception to those past experiences. Its definitely a quality piece and is a true showcase as to why Crimson Trace is the benchmark for laser manufactures in the industry today. Probably the best thing about this laser, however, is the price. MSRP comes in at only $149. Yes, you read that right. For under $150 you can have a laser from Crimson Trace that can fit on just about any gun with a rail. Its also comes with a three year warranty.

The only draw back right now is that there are only a few holsters options on the market right now. Really, thats just because it is still so new. You can rest assured that with the popularity of this new unit there will certainly be many more holsters to come. In the meantime, if you cant find a holster yet for your particular carry gun then this would still make a fine laser for a nightstand gun… and of course for a long gun.

Yikes! was pretty much my reaction. Thats the most I have ever spent at a gas pump before. I dont drive an SUV or anything… I just drive a 4 cylinder Honda and I dont have a boat or anything to fill up. I was actually just filling up about 3/4 of my tank and my two 5 gallon gas cans, but it was by far the most I have ever dropped for gas.

When I was a little kid (5 or 6 probably) my aunt and uncle had one of those huge ass RVs. They came to visit once and the day before they were scheduled to leave they took the RV to go get it filled up with gas. I being a little kid of course wanted to go for a ride in the big old RV… I can still remember how shocked I was when I saw that it took $100 to fill the thing all the way up. I was absolutely floored by the idea. What is sad is that now a days we are getting darn close to it taking $100 just to fill up a SUV or a truck.

Harley Davidsons have Smith and Wesson parts in them. So says Caleb.

Nikon has expanded its line of legendary sport optics with the addition of the new PROSTAFF 3 Laser Rangefinder, a pocket-sized tool built for precision, ranging speed and consistency out to 550 yards.

The PROSTAFF 3 is the perfect size and profile for any hunt.  It is easy to use in the field with a high profile display, single button control and ergonomic frame.  The PROSTAFF 3 measures ranges in either yards or meters and features an automatic power shutoff after the reading has been displayed for eight seconds.

With bright, multicoated 6x optics, the PROSTAFF 3 offers high-resolution images in most lighting conditions.  An easy-to-view uncluttered LCD display makes ranging fast and easy, even in bright sunlight.  Its compact frame weighs just 6.3 ounces, fits comfortably in a pocket or pack and can be worn on a belt without interfering with your shot.

The PROSTAFF 3 features an exit pupil of 3.5 mm for maximum brightness under less-than-ideal lighting conditions.  The eyepiece is adjustable, with a range of +/- 4 diopters, has 18.2 mm eye relief and has a real angular field of view of 6 degrees. The waterproof/fogproof construction makes it the ideal choice for inclement weather.

Suggested retail price for the Nikon PROSTAFF 3 Laser Rangefinder is $179.95 for the black and $199.95 for the REALTREE APG.

Here are a few good ones.

Over at Epic Tactical they have some good pics, video, and insight into the rifle. 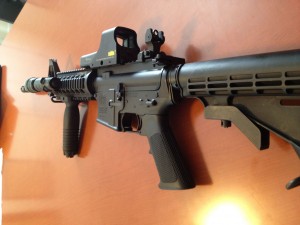 (Wilsonville, OR) Crimson Trace today announced plans for the introduction of a powerful, 100-lumen weapon light for the 1911 handgun, available through normal distribution channels in May. Building on the success of their innovative Lightguard™ platform for polymer handguns, CTC’s engineers designed the new light to fit America’s most popular pistol, while offering the same benefits of instinctive activation and seamless integration to the frame, without needing the services of a gunsmith.
Offering a blinding output in a compact package, the 1911 Lightguard is no wider than the pistol it fits and is shorter than the dust cover, resulting in a form factor that is easy to holster, conceal and carry. The Lightguard operates either as a standalone unit, or may be used in conjunction with Crimson Trace Lasergrips™ for the ultimate combination of low light defensive tools. Simply pick up the pistol in a firing grip and the target is illuminated with blinding white light, while a bright laser dot shows exactly where the bullet will land.

The new Lightguard squeezes an incredible 2 hour run time from one CR2 battery and features a master on / off switch to disable the unit for range practice. Crimson Trace is currently working with major holster manufacturers to ensure that users have a number of leather and kydex options available to carry their Lightguard-equipped pistol. At an MSRP of $199, the new 1911 Lightguard will be shown at the NRA Annual Meetings in St Louis, April 13-15

Its gonna be fun…